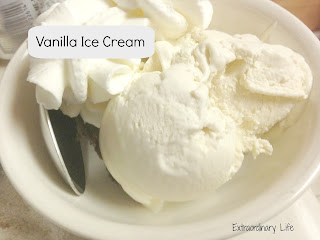 The Elf on the Shelf on facebook told me it was National Ice Cream Day today (July 21st) so I figured I would share my newest creation.

Oh my..... this was the best vanilla ice cream I have ever made (so says my kids). The base was so good, it could have been a rock your socks vanilla pudding, which I may modify to be a pudding in the very near future.  I am having visions of making pudding up ahead of time for back to school snacks.

I am going off the beaten trail with the heavy cream and agave in this recipe. We are a coconut/almond milk using house but we do occasionally use Heavy Cream and have no issues with Dairy. I have tried replacing the heavy cream with Coconut Cream and the result is also a very nice recipe. As I stated before on my blog tho, I do not like all coconut milk in my ice cream!!  I find that all coconut cream ice creams sort of coat the tongue in an odd way that I just don't like.  Cutting it with the Almond Milk does the trick!

While I mainly use honey as my sweetener of choice, I used Agave in this ice cream because I actually ran out of Honey. Agave is what I had.  I just had to post the resulting recipe, tho, because of the raves I received from the children. My son says he prefers this recipe to the one that I use honey in because he does not like the taste of honey in an ice cream. You can't trick him, he notices it every time. Honey (in our opinion) takes on an odd taste once cooked on the stove top in items like marshmallows and ice cream that my children just do not like. We are, however, ok with it in slow low temperature items like baked goods. My recommendation for using honey in ice cream?  Honey burns very easily so the method I would recommend with a custard ice cream dish made with honey is to cook the cream, egg and arrowroot until thickened and then add honey once thickened (off of the heat).

This is the ice cream recipe I would use for special guests and holidays. Try it with the heavy cream and agave and see for yourself.