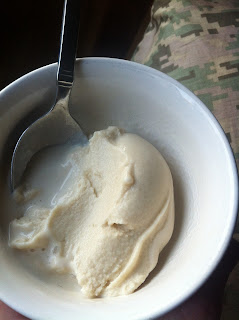 Shall I call this Paleo?  Technically it is NOT paleo with sweetener in it.  I add sweetener for my children because......well.....lets just say that I am again imposing my ideas of childhood on them!!!  What is a childhood without sweets?  So I like to add 2 to 3 tablespoons of some kind of sweetener to any of my desserts just for my kids!  I have grown so far from tasting and enjoying sweet foods that I find the taste of sugar overpowering beyond 3 tablespoons.

First, a little history.  My daughter has radical reactions to wheat,  not only Celiac but hives like a full blown allergy. Don't even let her breath next to wheat or she will get red circles under her eyes and gut issues exactly an hour later. For the most part this does not affect ice cream.  My son, however, is the silent sufferer. He has the just-mild-enough-to-not-have-radical-reactions sort of intolerances and allergies.  He suffers with a mild gut pain that builds over time and can suffer for 2 days to a week once the issue has reached its height.  But, immediately after taking in a toxin-to-him, he is fine. His issues are intolerances to Wheat and Casein but RAST tested mildly allergic to beef, corn and shellfish as a baby.  Keeping him away from beef and shellfish were easy.  The corn, however, was not so easy.  I am afraid I did not know enough about corn and its use as a sweetener back then.  He has outgrown the beef and shellfish allergy but now his allergy to corn is worse than ever.  He would literally rather starve then to eat a corn related product and suffer.

So ice cream...... lots of it is sweetened with corn syrup!  Not to mention that its main ingredient is dairy,  LOL.  So I have been tinkering with various substitutes lately.  I want something that suits our Paleo lifestyle while addressing our various other issues.  So first I start with these recipes:

While I adored the banana ice cream the kids were offput by the underlying banana taste.  See....I close my eyes and think of the chocolate covered bananas I enjoyed as a kid.  Maybe my kids would enjoy these recipes better once I mastered a more exact replacement for the ice creams they liked from the store.

I thought the high fat content of the pure coconut milk was odd.  The ice cream sort of coated the tongue sort of like a heavy cream ice cream would.  So I mixed them.  The end result I really enjoyed the texture of.  I am re-introducing the egg as a thickener because while we have to eliminate a lot of items in our house, eggs were NOT one of them.  THIS is the recipe that works for us.  Best yet, its a base.  Use it to create your own master piece!!!