We have made rice pudding many ways before we come upon this method.  This is our family's favorite rice pudding recipe.   It might even be our favorite dessert recipe.  We like to eat it warm and a sprinkle of cinnamon on top.  I originally started making this dish with an added beaten egg at the end but the egg would thicken it so much that the rice pudding really was not very good for the next day.  And rice pudding for breakfast is AWESOME!!!  So I started leaving the egg out and just cooking it longer to thicken. 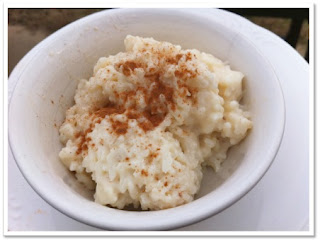 Place water, rice and cinnamon stick in saucepan and bring to boil.
Cover and reduce to low.
Cook for 15 minutes or until water is fully absorbed.
Remove cinnamon stick pieces (if using).
Stir in milk, canned evaporated milk, canned sweetened condensed milk, raisins if using.
Bring back to a slight simmer, stirring constantly. (Note: add egg at this point if using)
Otherwise, reduce heat to low and cook until the milk mixture is slightly absorbed and thickened; about 20 minutes.
Be sure to watch the pot and stir.  Nothing worse that burnt milk on the bottom!
Sprinkle with Cinnamon before serving!

Start this while you are making dinner and have a warm dessert ready when you finished dinner.

Cinnamon sticks can be costly.  Omit if necessary.  If I am out of cinnamon sticks I would just add a teaspoon of powdered cinnamon to the milk mixture instead.


If you are in a hurry and/or wish to try your pudding with the egg, just temper your beaten egg first with a bit of the hot rice milk (stirring fiercely).  Next stir the egg mixture back into the rice, mixing constantly and cooking for 2 minutes.