So we were cleaning out the dead wasteland of wilted vines from the climbing beds and feeling really sad and sorry for ourselves. For a moment I had to walk away, we had such high hopes. Suddenly, we noticed it.  A CUCUMBER!  Hidden in among the watermelons.  Yay, I had thought they all died.  Mostly the loss was Honey Dew Melon vines but there is still one that survived.  Yay!  I'm not feeling quite so bad after all.

Using mostly garden picked items, this week we enjoyed Parsley Potatoes from our potato harvest, Purple Cabbage Cole Slaw from all those purple cabbages, and Greek Salad from onions, grape tomatoes and that cucumber.  All we needed to add was feta and olives.  Jalapeno's are getting ready so I see Salsa in our future.  There are TONS of tomatoes on the vines but right now only the grape tomatoes are getting red.

This week we will start Celery, Broccoli, Cauliflower and Lettuce in the nursery to be planted end of Summer.    Lucky for us, we have seed pods from the Broccoli that bolted.  ;-D  We also have plans of re-planting some potatoes.

In case you were wondering what happened to our Cauliflower, we messed up.  Apparently we were supposed to fold in the leaves or something like that?  Anyway, I was only half listening when hubs told me.  I'm sure he will do better next time!  :-) 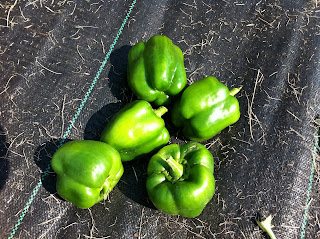 Harvested those Bell Peppers
Hubs wanted to tie up the plant so they had to be removed.
I sliced most of them and put them in the freezer for stir fry. 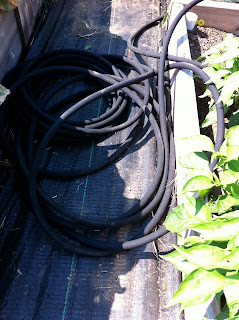 Put in new watering soaker hoses.
Part of the problem is that the old hose had a leak
and not all plants were getting watered properly. 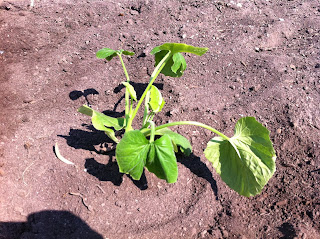 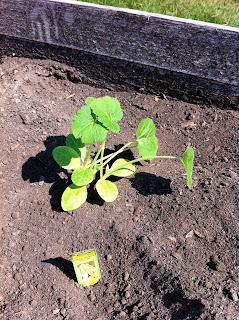 New Yellow Squash plant.
Both are planted in the old onion bed now
instead of directly in the ground. 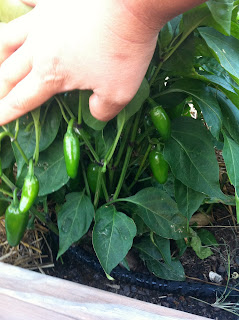 I wish a photo could show you just how man of these
Jalapeno's are on this bush.  TONS of them. 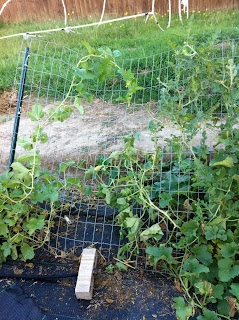 The very large empty space on the climbing trellis
as a result of removing the dead vines. 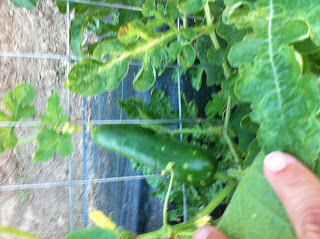 A cucumber!  Those leaves are watermelon plant leaves
which is why we could not immediately see it.
Yay!  Im so happy to have cucumbers still.