First off, how do you spell this?  Muffuletta or Muffaletta?  What exactly is a Muffuletta anyway? I had to ask myself this question because I never heard of it before.  I needed to figure it out soon because I need a Gluten Free one in under a weeks time.  So I started the way I start out anything....Google Search. In this search I discovered that Muffuletta is the signature sandwich of New Orleans. Wikipedia says that the Muffuletta originated in New Orleans, Louisiana and is a type of round Sicilian type sesame bread that could be compared to a submarine type sandwich.  The bread is made into a large round and somewhat flattened loaf with a sturdy texture and about 10 inches in diameter.  It is described as being somewhat similar to focaccia.  It needed to be sturdy because of the juicy olive spread that is served on it as a sandwich.

OK, that is a good place to start.  I think I can muster up a loaf of this type. My mother is Sicilian after all and I do have one particular recipe that she says is similar to Sicilian bread.

The Muffuletta bread is split and filled with sliced Provolone cheese, Genoa salami and Cappicola ham, topped with Olive Salad that includes olives, oregano, parsley, olive oil, red-wine vinegar, salt and pepper.  Sounds like an Italian hoagie to me.  Either that or a Antipasti served on a roll!  LOL.

OK, so are you ready?  Lets get started. 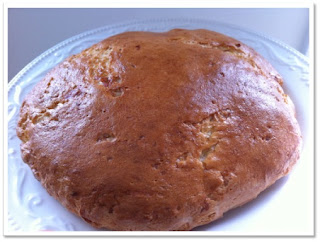 Preheat oven to 170 degrees and turn off.
Line Pizza pan with Parchment Paper sprayed with oil. 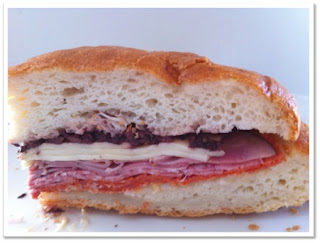