We had a celebration last Wednesday at Church in honor of the upcoming Fat Tuesday (today).  In an attempt to copy what was being served for my daughters sake, I came up with my own version of King Cake.  I noticed that the "cake" portion of the wheat filled King Cake was thin and very cake like and was rolled up like a cinnamon bun. I would not say an actual King Cake was exactly like a cinnamon bun though since the cinnamon bun batter ends to be more dense. Considering how sticky Gluten free cake mix is, I don't think there was any way I was going to make it cake-like.  This is what I finally came up with.  It is a nice compromise between the two.  The recipe is not too bread-like, not too cake-like and has lots of cinnamon goodness!
1 cup Warm Water
2 1/4 teaspoons Yeast
3 Egg Whites
2 Tablespoons Oil
2 Tablespoons Sugar
2 cups Flour Blend*
2 teaspoons Xanthan Gum
1 1/2 teaspoons Salt
1/2 teaspoon Vinegar 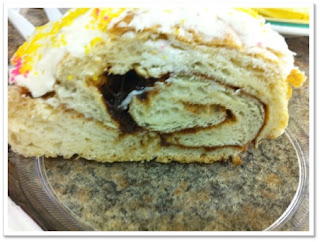 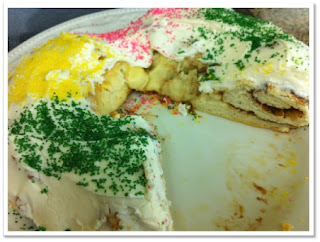