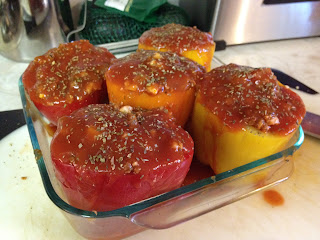 I have not eaten stuffed peppers in at least 5 years.  I ran into my mother in the supermarket and she had bell peppers in her cart to make some stuffed peppers and I immediately had to make them too!  Traditionally stuffed peppers have rice inside along with the meat and sauce, however, we are doing without grain lately so I had to fix that. I ended up using riced cauliflower instead. Another thing I did that is off the beaten path for me was to not look up a stuffed pepper recipe in my old Betty Crocker cookbook! Whenever I want to try and make something I have not made in such a long time Betty is my go to gal!  I decided, instead, that I would use my Bolognese Meat Sauce recipe and just make it with less tomato sauce. The dish turned out so flavorful and was a smashing hit.  The adults added extra topping to their pepper and the kids ate a half of pepper each.  The kids actually ended up digging the filling out and left the pepper shell behind.  I am still happy though, everyone ate and everyone was full with just one pepper.  This is a wonderful and complete meal.