It took me a while to realize what to do with all those Jalapeno's we were getting from our garden.  All I can say is WOW man! We had only a large handful at best last year.  This year we have massive amounts of peppers. I have no idea what the difference is.  Was it our especially HOT summer?  I was chopping them and putting them in the freezer for whenever I make mexican food (and suffering 2nd degree pepper burns on my hands for all the next day).  That is when it hit me, Poppers.  Poppers is on the post-it note stuck to my computer as a work on recipe.  It has been staring at me the entire summer, yelling as I ignored it.  Lisa, why have you forgotten me?  Why have you not made me as you promised?  I have no excuses except too busy having summer fun! :-D

I'm not going to lie to you here.  I HATED putting these poppers together.  It is an extremely time consuming task.  They are so tiny, this recipe makes so many of them and for the most part I had to double and triple dip them to get the coating to stick to the pepper.  You will literally stand there performing the same task for over an hour.  I never was any good at mundane tasks.  But the final results are well worth it and I WILL do it again.  I have a freezer full of poppers now plus extra filling for the next harvest.  Maybe I will even recruit help with the process to make it more fun.

Here is my version of this long time recipe, enjoy! 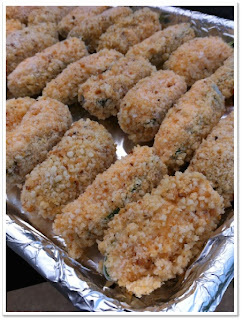 (Freeze at this point) 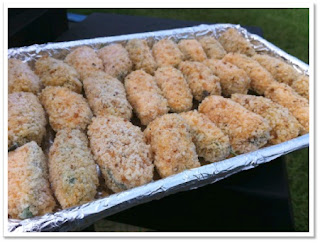 Some Jarred Varieties of Bacon Bits are NOT gluten free.  I usually save a slice or two from a Sunday breakfast and chop it up and put in the fridge for just such a recipe.

If you like your Poppers mild, remove all the seeds and membrane.  If you want the heat kicked up, leave the membrane and some seeds

You may have to go with the egg and bread crumbs a second time.  I was finding that the crumbs did not stick well and needed a second dip.  It really de


Other great Jalapeno recipes on the web:

The Whole Gang's Gluten Free Jalapeno Poppers
Epicurious has a recipe and they are leaving their jalapeno's whole.
and finally one of Allrecipes most popular versions